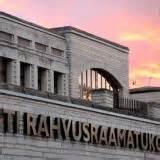 Ever returned a library book really late–as in embarrassingly late?  Did you have a good excuse?

This latest piece of news will break any records, and best any excuses.  According to the “The Huffington Post,” a man in Estonia  returned a library book he checked out 68 years ago, while Estonia was occupied by Nazi Germany.  The book?  A work of fiction by Estonian author Eduard Vilde.

The man partly blamed the late return on an aerial bombing that destroyed the library in WWII.  He offered to pay late fees, but they were graciously waived.