An earlier Muze Tap divided creative writing into two separate processes, tree shaking then jelly making, brainstorming material then selecting and arranging it, going with the flow and then building a channel for it. No matter what metaphor we use, it’s important to remember each mental process doesn’t happen just once. Writers move constantly back and forth between spontaneous outpouring and critical assessment, between imagination and craft, between the stuff they wanted to write and the stuff they have to write because the stuff they wanted to write is telling them to.

This writing and rewriting is almost like breathing, pulling new material into your text and expanding it, then cutting out material that has become extraneous and watching it contract.

The basis for this enterprise of creative shaping is the zero draft, a draft so rough it doesn’t even qualify as first!

A zero draft springs largely from dedicated tree shaking but forays into jelly making may also contribute to it—the important requirement is that in this draft, you have written through to an end. The ending will undoubtedly change as you begin to shape your piece; you may even wind up rejecting it. But its provisional existence means that you have slogged through the terrifying middle, silenced the voices of doubt, and come out on the other side. It means you have the sketch of a world and a rudimentary arc of action. You’ve got something to work with. 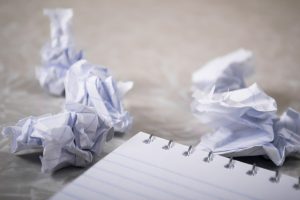 Here are some tips about generating a zero draft:

Do you have any other tips that have worked for you? Share them with us!