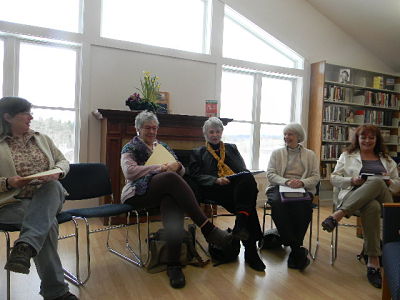 An esteemed group of Murderers met this past weekend in beautiful, bucolic Belgrade, Maine, to read chapters from their most prized crime novels.   Our own Karetta Hubbard was among them.  All are members of the New England Sisters in Crime,www.sincne.org.

Seated from right to left, Jayne Hitchcock writes non-fiction and specializes in cyber crimes and cyber bullying and read from her latest book, True Crime Online.  She volunteers with the U.S. Department of Justice Office for Victims of Crime, the National Center for Victims of Crime, and law enforcement agencies worldwide. She has worked with legislators in the drafting and passing of many of this country’s Internet laws.

Janis Bolster, author, editor, and owner of Reck House Press in Bath, Maine, read from her book Doubles, which tracks a woman’s investigation into the “accident” that caused her sister’s death.  Carol-Lynn Rossel is a writer, photographer, designer, audio engineer and 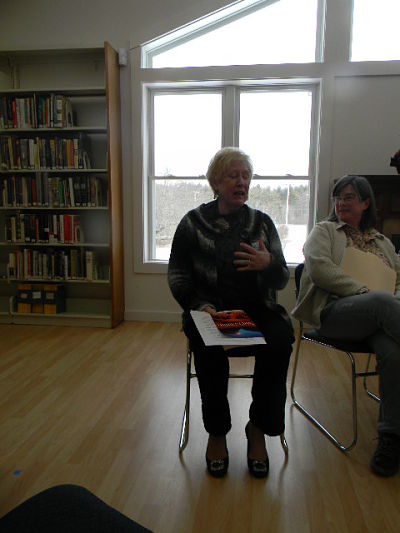 composer with 26 published books to her credit, including 16 mystery anthologies with Isaac Asimov and Martin Harry Greenberg.  Her current work-in-progress is a tongue-in-cheek cozy mystery Sock Monkey Business, which combines her love for mysteries with the expertise she gained in the many years she spent as a toy designer.

Anne Morin, a former neuroscientist who now owns a B&B, read from her neuroscience thriller, Experiment One: Murder in the Lab.