Why are beginnings so tough? Something stirs in your imagination, a bright idea that while you are speeding on the freeway and begs to be expressed in words.

You want to get it down in writing; indeed you won’t know exactly what you have until you see what you write. Yet you avoid writing. You check email, make tea, or simply stare out the window. 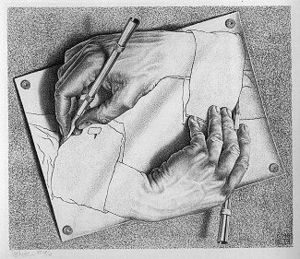 If each hand is drawing the other, how did the process that has now advanced to the shirtcuffs ever start?

The chances are infinitesimal that the first words you write will be the first words of your finished text. If your writing is to have a satisfying, coherent form, you can’t determine the beginning until you know the end. And unless you are sticking to a rigid outline, you won’t know the end until your writing discovers it. (Rigid outlines are not recommended; they prevent life from happening on the page.)

Thus as Escher’s hands suggest, you can begin your writing process anywhere—there is no right and wrong, no need to wait for the perfect paragraph to leap fully formed from your brain. Relax your standards and just start somewhere. Whatever words come out, they will inevitably need to be fiddled with—expanded, rephrased, rearranged, all doable. Meanwhile, those first words will lead to more words. And the bright idea–the character, image, or situation–that seemed pregnant with a whole world will begin to give birth.

Once you have made enough beginnings that you’ve generated a provisional draft, you can consider a different sort of beginning—the starting point for your narrative, an exciting point of entry. It will have the shape of a disturbance to a pattern, an event with the energy to propel your story forward. It’s the equivalent of the dead body in the conservatory, or the stranger galloping into town. In Leaving Tuscaloosa, a white boy stupidly lobs an egg and hits a black minister. In Cologne, the awkward yet self-possessed au pair from Germany arrives to assume care of two pre-teen sisters.

Finally you’re ready to decide on the beginning words of your final text. To reach the sentence with the power and pizzazz to stand first in your narrative, try peeling the sentences away from the start of your last draft one by one. Stop when you hit the line that tells your reader just enough that she feels compelled to read forward, in search of clues that will reveal exactly what that sentence means. Never waste your opening sentences on exposition. There’ll be plenty of time for that once you have the reader hooked. Remember the old Greek trick in drama: begin in media res. In a story, look for the narrative hook.