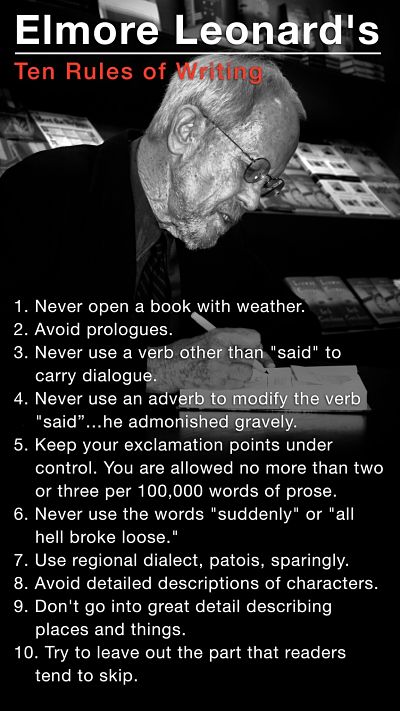 Last week, acclaimed author Elmore Leonard passed away, leaving a legacy of westerns, thrillers and crime fiction novels, as well as a number of screenplays, short stories, and books turned into movies starring the likes of Clint Eastwood and Paul Newman.

In 2001, Leonard shared with the public ten rules he had discovered while honing the craft of writing. Surprisingly specific, they are geared towards staying out of the way of the story–being invisible, he called it.

Enjoy two of our favorites from his 10 rules for writing:

3. Never use a verb other than ”said” to carry dialogue.
The line of dialogue belongs to the character; the verb is the writer sticking his nose in. But said is far less intrusive than grumbled, gasped, cautioned, lied. I once noticed Mary McCarthy ending a line of dialogue with ”she asseverated,” and had to stop reading to get the dictionary.
6. Never use the words ”suddenly” or ”all hell broke loose.”
This rule doesn’t require an explanation. I have noticed that writers who use ”suddenly” tend to exercise less control in the application of exclamation points.
To balance his ten highly particular writer’s commandments, Leonard added an eleventh general tip: “If it sounds like writing, I rewrite.”
Read all of Leonard’s rules in detail HERE.

Do you agree with Leonard’s wisdom? What do you think he means by avoiding writing that sounds like writing? Tell us about it on our Fuze Facebook page.